The project ‘366 Liberation Rituals’ consist of lots of minimalistic micro-political interventions in public space realized by the artist on everyday basis actions during whole 2008 and partly 2009. The starting point for 366 liberation rituals is the 40th anniversary of 1968, but it refers also to the heritage of conceptual art practices of ex-YU region – in which, for example, the Group of Six Artists played a significant role – and to Jean Luc Godard political movies and conceptual strategies from late 60ties, early 70. 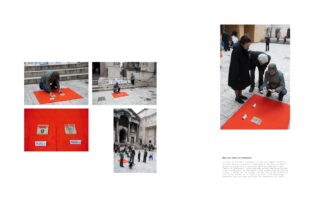